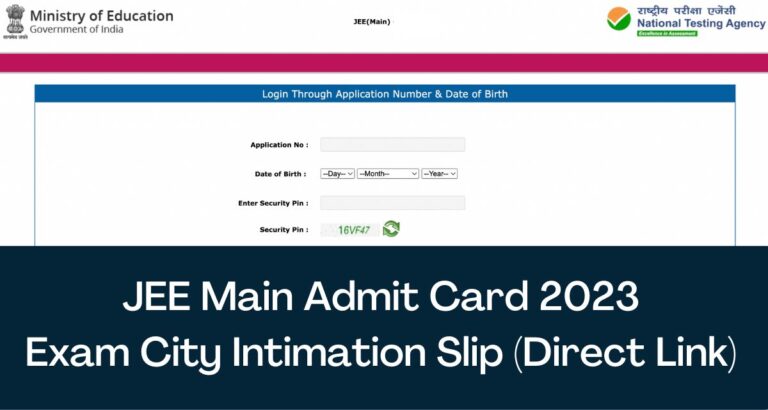 After which the aspirants appearing in the exam will be able to download the admit card for the exam on JEE Main Admit Card 2023 Release Date from the NTA website. Guys, you will also be able to download JEE Main Admit Card 2023 from the link given here. The application process for Joint Entrance Exam 2023 January session was closed on 12 January 2023 on the official website jeemain.nta.nic.in. JEE Main Exam City Intimation Slip has been released on 18th January 2023.

The application process of JEE Main has been ended by the National Testing Agency (NTA) and the examination for all the aspirants involved in the application process will be organized on 24, 25, 27, 28, 29, 30, and 31 January 2023. Only after the date of JEE Main exam was announced by the NTA, the demand for postponement of the exam by the aspirants has increased rapidly.

According to an official schedule released by the NTA, the JEE Main 2023 Session 1 Admit Card will be released anytime. The official announcement of city of examination is issued on 18th January 2023. Check this space regularly to get the latest details on JEE Main Admit Card 2023 Download Link.

All the aspirants appearing in the JEE Main exam must have passed class 12th or equivalent from any recognized board. No age limit has been prescribed by the National Testing Agency for any aspirant appearing in the JEE exam. Changes have also been made in JEE Main exam eligibility criteria this year, which has introduced 75% criteria for all aspirants who get admission in NITs, IIITs and CFTIs.